As we start heading toward spring, meetings and events industry professionals around Colorado and the world are preparing to celebrate and recognize an industry that impacts so many people and businesses. Plans are well underway for Colorado Meetings Week, March 11-13, 2019, and Global Meetings Industry Day only a few weeks later on April 4, 2019.

Setting the Foundation for Colorado

When a significant economic recession hit the United States in 2008, it trickled down to the hospitality and meetings and events industries and struck quite a blow. People started questioning expenses incurred for face-to-face gatherings, especially for government meetings and those hosted by publicly traded companies. It became a buyer’s market as properties venues scrambled to fill meeting and event space that had been relatively easy to fill before.

A year earlier, Colorado Meetings + Events magazine launched its first-ever readers’ choice awards celebration in Denver, and I clearly remember this first event as it was my third year as editor. The Meetings Industry Council (MIC) of Colorado Educational Conference and Trade Show was entering its sixth year in 2007 and took place at the Holiday Inn DIA in Denver with 550 attendees and 100 trade show exhibitors.

Little did we know how important these two gatherings would become, when soon after we started scheduling them to run consecutively. The reasoning was we could have more impact together and make it convenient for people who live and work outside Colorado’s central Front Range area to hit both events at once and schedule appointments before and after. We were creating Colorado Meetings Week without really knowing it, right before things got a bit tough.

It’s also important to acknowledge organizations like Destination Colorado and the 13 industry organizations that make up MIC for helping Colorado be a state that others envy for the teamwork and partnership that happens here. If everyone is doing well, so is the industry. 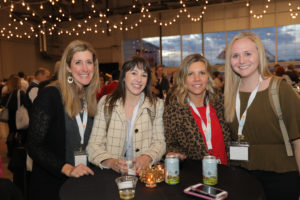 Today – Stronger than Ever

Now, I’m happy to say the industry has solidly rebounded and the magazine’s Best of Colorado sells out every year.  MIC Conference’s registration numbers have more than doubled and the tradeshow booths quickly get snapped up, requiring a move to the Colorado Convention Center several years ago. It’s some of the best celebrating, networking, learning and doing business of the year. Here are the details for Colorado Meetings Week 2019.

Colorado Meetings + Events Best of 2019 will recognize the readers’ choice winners and finalists in 25 categories and introduces seven new Hall of Fame inductees on March 11 from 6 – 8:30 p.m. at Mile High Station and its new sister property, Ironworks. Registration is required as the event sells out. 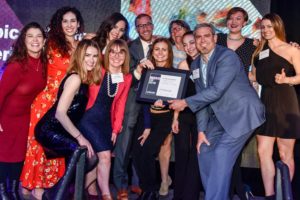 One of the award winners at the Colorado Meetings + Events Best of 2018. Photo by Flashbox Photo Booth.

The 19th annual MIC of Colorado Educational Conference and Trade Show  kicks off on March 12 at 4:30 p.m. with a keynote speaker followed by a trade show and opening reception. There is a planner-only session and activities that begin at 2 p.m. The following day, March 13, is jam-packed with keynotes, breakout sessions, lunch, the trade show and a closing reception. Make sure to register in advance. 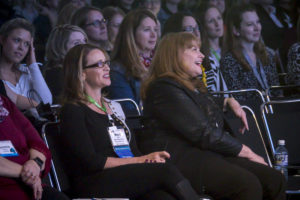 Meetings Industry Council of Colorado Educational Conference and Trade Show in 2018. Photo by All Digital Photo and Video.

The Meetings Mean Business (MMB) coalition was created in 2009 to showcase the value that business meetings, travel and events bring to the U.S. economy. Its members span all facets of the face-to-face meeting and events industry, which have come together behind a common goal: providing the resources, tools and information to show the real impact the industry has on businesses, economies and communities.

On April 16, 2015, the first North American Meetings Industry Day was held to spotlight the substantial value derived from meetings, conferences, conventions, incentive travel, trade shows and exhibitions. It was an expansion of the successful efforts in Canada, which had hosted the annual Canadian National Meetings Industry Day for two decades. MMB coalition members, in addition to industry leaders across Canada and Mexico, held events in communities in their respective countries.

A year later, on April 14, 2016, the first Global Meetings Industry Day (GMID) was launched by MMB and was an expansion of North American Meetings Industry Day. “GMID will unite the meetings industry in a way that has never been done before,” said David Peckinpaugh, MMB co-chair and president of Maritz Travel noted at the time. “The growth and success of our industry are critical to the world’s economy and we look forward to communicating our value on the global stage.”

In 2019, Global Meetings Industry Day is on April 4, so not long after Colorado Meetings Week. Find out the details and tap into helpful resources if your organization or business wants to take part.

A new report by Oxford Economics affirms that face-to-face meetings and business events not only play a critical role in connecting people and driving business results, they also support 5.9 million jobs and hundreds of billions of dollars in annual revenue.

Every dollar spent on face-to-face meetings and business events generates an additional $1.60 for the U.S. economy.

The economic impact generated by meetings is shared across a variety of industries. Meetings direct spending has expanded 23% since 2009, primarily due to increases in the number of meeting participants.